Besan is also known by many other names like Gram Flour, Chickpeas Flour,Ground Garbanzo Beans,Ground Chana Dal. Raw Chickpeas or raw chickpeas or roasted chickpeas are ground to fine powder to make yellow-coloured besan powder.Our besan is 100% free from any extraneous matter,colourin matter and preservatives. 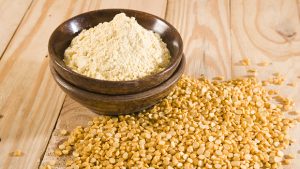 Gram flour is much more nutritious than wheat flour. It is low in styrated fat, cholesterol and sodium. Consider this: 100 grams of besan flour contains about 10 grams dietary fiber and 22 grams protein higher than usual wheat flour. It contains a hogh proportion of carbohydeates, up to 57 grams/100 grams. However, compared to the standard wheat flour, it is still lower in carbs. So, if you have to avoid gluten or are watching your weight, besan flour makes a healthy and versatile alternative to high carbohydrate wheat flour.

Studies in Melbourne, Australia made a comparative study of wheat flour and chickpeas to find their respective insulin response to middle aged men and women who have no health complications. The results, as published in a 2004 issue of The American Journal of Clinical Nutrition, mentioned that a chickpea-dominated diet resulted in significant reduction in blood sugar as compared to other diets. Another study, the result of whitch was published in the 2007 issue of The Journal of the American College of Nutrition, showed that besan flour could significantly decrease the quantity of total cholesterol from body, as compared to wheat flour.